Changing the Course of History!

Re-writing the Cold War for fun and profit

Twilight Struggle is a two-player game simulating the 45 year struggle between the Soviet Union and the United States that was the Cold War. Unlike traditional strategy games which involve pitched battles between the armies of two or more players, Twilight Struggle offers a more nuanced approach to Cold War strategy -- with players initiating coups in key battleground states, attempting ideological realignments, and spreading their influence through the use of operation points on event cards. The game board is a world map of the period (1945-1989), upon which players place influence tokens to denote whether a particular country is under the American or Soviet sphere of influence.

The primary driving mechanism for this game is card play and decision making revolving around said cards. There are Soviet and American events dealt to both players -- many of which represent real historical happenings -- and it is up to the players to mitigate the damage of their opponent's events and curb their influence across the regions of the world. The game is split into the Early War, Mid War, and Late War period, with much of the Early War favouring the Soviets,while the Late War tends to benefit to the Americans.

The event cards of Twilight Struggle add considerable detail and flavour to the game: from the establishment of the Warsaw Pact, to the Vietnam War and the Cuban Missile Crisis, Glasnost and Perestroika, the Space Race, and the looming possibility of game-ending global thermonuclear war. If your interest hasn't been piqued yet, here is a summary of a full four-hour game of Twilight Struggle, with a focus on flavour and theme regarding what was taking place: 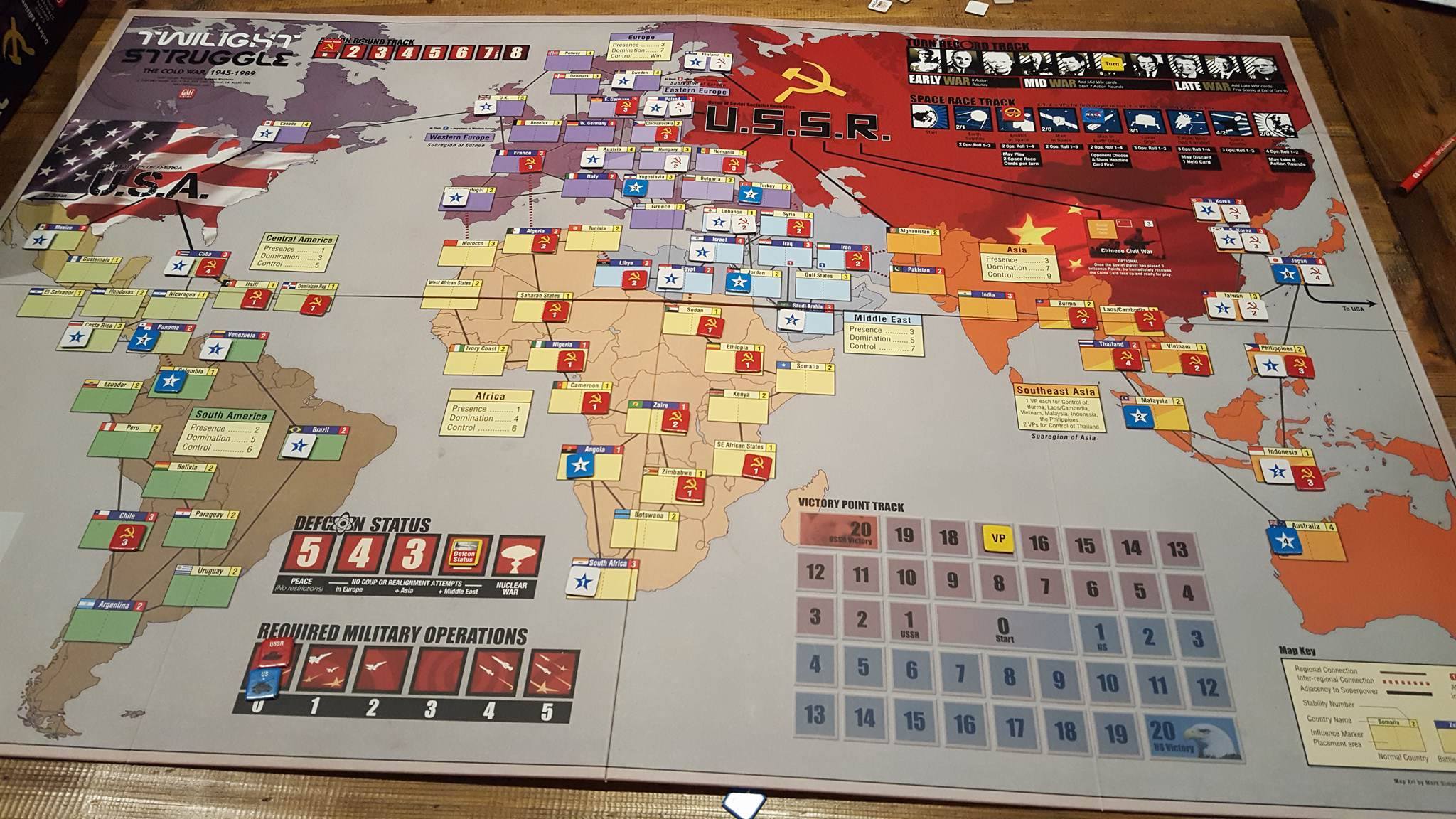 The game began with two headlines: an American red purge and a Soviet blockade of West Germany. While American influence in West Germany waned from the outset, the Soviets were hit with a -1 penalty to all their operation points. The Soviets began this Twilight Struggle by sponsoring the Olympics, which led to a US-led boycott. The Soviets responded to the boycott by increasing their influence in Eastern Europe and dominating Yugoslavia and Poland. The US, meanwhile, concentrated on the space race. Thanks to a captured Nazi scientist, they were the first to send a satellite into orbit. The Soviets acted quickly to capitalise on their early gains in Europe by triggering "Europe scoring", gaining an early lead thanks to controlling key battleground states such as Poland and East Germany. The US were keen to gain more of a foothold in the Middle East and engineered a coup to overthrow the Soviet-controlled government of Iraq. Fortunately for the Soviets, the coup was only a partial success, with the new Iraqi government adopting a neutral stance. The USSR installs Gamal Abdel Nasser in Egypt to control a pivotal Middle Eastern country. The US dominates Iran but the follow-on effect caused Romania to fall under Soviet domination. The USSR pushes its advantage in the Middle East further by orchestrating a coup in Iran (to bring it back to neutrality) and bring Lebanon under Soviet domination. As a result, the USSR wins the subsequent scoring in the Middle East and Asia (controlling North Korea by default) to gain a significant early lead. The US then gains a foothold in Asia with the Formosan Resolution, turning Taiwan into a battleground state for the US alone. However, if the US requested the assistance of China at any point, the Formosan Resolution would be cancelled. It was important for the US to both control Taiwan and not be tempted to strike a deal with the Chinese -- which would naturally anger the Taiwanese. The Korean War breaks out with Soviet-backed North Korea invading South Korea. The war is a success and the USSR expands its influence into South Korea. At the beginning of the next turn, the US establishes the Central Intelligence Agency and gains important intel on upcoming Soviet operations. What follows is a flurry of events in Europe: The Soviets respond to the creation of the CIA in kind by financing socialist revolutions in France and Italy, signalling American decline in those states. The US then pours money into Yugoslavia to balance out its influence there with the Soviets. Charles De Gaulle comes to power in France, booting out American influence which gives the Soviets an opportunity to dominate France. Meanwhile, the Truman Doctrine allows the US to complete kick the Soviets out of Yugoslavia, turning that communist state into an American ally. The USSR takes the issue to the United Nations and influences the General Assembly, allowing it to gain control of Algeria and Libya. As the US tries to play catch up, it institutes a Five Year Plan, forcing the Soviets to discard one of their events. Not to be deterred, the Soviets leverage China and use the Chinese influence to gain dominance over Japan and South Korea. The US implements the Marshall Plan, and seven countries across Western Europe gain a boost of US influence. The USSR responds almost immediately by creating the Warsaw Pact and ensures its domination of Romania and Czechoslovakia, while turning Yugoslavia neutral. At this point, the Americans were far superior in the space race, but the reputation they garnered from that was counteracted by the military domination of the Soviet Union here on Earth. The US tried to rectify some of their weaknesses, particularly in Asia, by establishing the Japan-US mutual defence pact.

It was at this point that the Suez Crisis occurred, removing US influence in Israel and France (turning them neutral) and partly removing US influence in Britain. The US, in response, triggers Eastern European unrest -- Soviets lose dominance in Romania and Poland, while the Americans dominate Yugoslavia once again. The USSR continues to turn the screws in Western Europe by forcing the Americans out of Italy and West Germany, while the US has a failed coup in Egypt. The Soviets gain further  influence in France, and come to dominate Poland once again. By the end of the early war, the Americans are well and truly winning the space race by getting a man in orbit, but the Soviets have tipped the balance of power in Lebanon, and crushed American influence in Vietnam and Cuba. The Soviet Union opens up the Mid War era with the Brezhnev Doctrine, increasing the point value of Soviet operations this turn. It would prove to be an important move. Despite the US making grain sales to the Soviet Union and increasing their influence over Cuba and Panama, the Soviets used the Brezhnev Doctrine to topple a host of weak and unstable states around the world including Nigeria, Indonesia, Laos/Cambodia, Dominican Republic, Cuba, Haiti, and the states of the Sahara. The US responded by turning Taiwan neutral, but the Soviets had finally been rewarded for sowing their seeds of influence in Western Europe: France had become a communist  state. With Europe seemingly lost, the US attempted to gain a foothold in Asia again by influencing South Korea, but had inadvertently opened up Soviet gains through the  creation of OPEC -- two OPEC states were Soviet dominated (Iran and Libya). Meanwhile in South America, Allende came to power in Chile and Soviet influence there  grew, while a Soviet coup in Thailand was successful. A failed US coup in Iran was followed by Soviet gains in Chile, Sudan, and Syria. It seemed as if the US was losing the battle of hearts and minds with much of the map under Soviet influence. It was at that point that the US played "The China Card", leveraging China's influence in Asia to bring Indonesia under US dominance and turn North Korea into a neutral state. Unsurprisingly, the Formosan Resolution was ended, and Taiwan did not want to be a part of US plans into the future. At the beginning of the next turn, the US played the headline "Bear Trap", forcing the Soviets into a quagmire in Afghanistan. The Soviet Union, meanwhile, triggered scoring in Central America to get 6 points away from victory. The Soviets leveraged the Chinese once again to dominate Indonesia and the Philippines, while the Richard Nixon got China onside to claim 2 victory points for the US. A failed Soviet coup in Malaysia and a successful Camp David Accords placing US influence in Israel, Jordan and Egypt meant that the USSR was now on the back foot despite being so close to victory. The Soviets triggered Southeast Asian scoring to bring themselves 3 victory points away from the win, while the US failed to get to the next step in the space race. While the Soviets dominated Egypt, the Americans dominated Jordan and Lebanon, and Saudi Arabia was evenly split. The US Flower Power peace movement meant that if the US ever went to war, it would give victory points to the Soviet Union.

Meanwhile in Asia, Soviet-backed Pakistan fails to defeat India in the Indo-Pakistani War, while Decolonisation takes place across Africa, with Ethiopia, Cameroon, and the Southeast African states falling under Soviet domination, and Angola turns from US to neutral. The US pours money back into Angola to realign it with their interests, while the Soviets influence the Hungarian government.

WE WILL BURY YOU

In a major power play on the very next turn, Nikita Khrushchev's infamous "We Will Bury You" speech signals that the Soviets are ready to end the Cold War in their favour. The world degrades to DEFCON 2 and, unless the US can force the UN to intervene, the Soviets will become victorious. Fortunately, the UN does intervene. Instead of total victory, the Soviets must be content with the domination of Zaire and Zimbabwe. But with so many African states now under Soviet domination, the US suspects something is afoot. It attempts ideological realignment in Zaire. Failed. It attempts it again in Nigeria. Failed. The Soviets reveal their trump card: the triggering of African scoring, and their domination of African states is enough to push them over the edge for a total political victory.

The Cold War is over, and the world is under the yoke of the Soviet Union.

Twilight Struggle is an amazing game that you will want to replay over and over. You can find it in your local Good Games store or at our online store. If you live in New South Wales, you could also check out Good Games Miranda's upcoming Twilight Struggle League!